The Best Part of Horse Shows 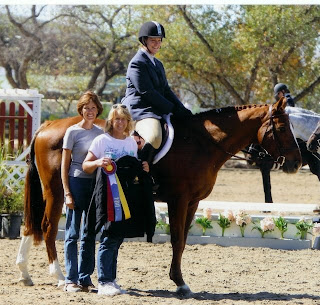 That's me in the jeans and gray t-shirt, standing next to Sue, my friend and former horse show coach. She's the trainer of my long-time buddy Debbie, who is aboard her gelding Tangerine Dream. Debbie had just won a hunter under saddle class.

Judging last weekend forced me to reconnect with my past as a competitive rider. For a while after my riding accident, I mourned the end of my showing career. But then I got to the point where I wanted to stay away from anything remotely related to horse shows. It was as if I was angry at the whole horse show environment, as if it were some entity that was responsible for causing me so much grief. Sounds ridiculous, right? But now that I'm really quite happy to be a recreational rider-- in a western saddle most of the time-- I can re-evaluate horse shows and appreciate all that was fun about competing.

Besides the adrenaline rush that came from winning a ribbon, and the deliciously invigorating anxiety that accompanied the process of memorizing a course, I think what I enjoyed most about competing was the time spent with my sister and my friends. Perhaps it was because the stress of competing revs up everyone's emotions, but it always seemed like we laughed harder and commiserated more deeply when we were gathered together at a horse show. Even if my sister and my friends and I were all competing in the same events, for the same assortment of ribbons, we still cheered each other on, ribbed each other about any errors ("Did you really expect your horse to leave the ground 8 feet away from that oxer?"), and leaned on each other for support when our horsemanship skills seemed to abandon us.

That's why I guess this photo has such special meaning for me. Debbie won a big class at a big horse show and she motioned for me to come into the arena to be part of the traditional "win picture." Me. Why? Because I was her friend, and we had spent probably two decades competing together up and down the California coastline. Even though I was no longer a competitive rider, it was her way of saying that I was still a member of her victory party.

That's so sweet! I wish I had a sister to share my victories with. Even my failures.