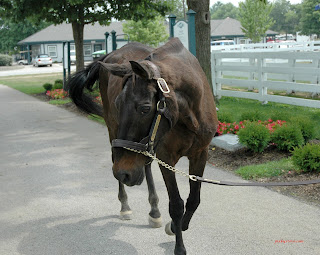 Horse racing is not a sport that I follow closely for a variety of reasons, but occasionally a particular horse captures my imagination-- and my heart. One of those horses was John Henry, a scrappy, physically unremarkable dark bay gelding with a cantankerous disposition. He was no flamboyant Secretariat. John Henry was a working race horse that appealed to those of us who liked the idea that a horse bereft of a fancy schmancy pedigree could still win millions at the races.

My sister and I saw John Henry many years ago when he was still in fine form, at Hollywood Park race track near Los Angeles. I don't recall much about that day except that we felt we were traveling to see a legendary creature, a four-legged figure we'd only glimpsed in grainy newspaper photos. And then, there he was, fuzzy shadow roll on his noseband, his plain brown head bobbing all the way to the post, his ears and eyes revealing an outright disdain for the other horses that dared to encroach his space. We were enthralled.

Many years later we saw him again at Kentucky Horse Park, where he lived a luxurious life in retirement beginning in 1985. He was not the embodiment of a phenomenal race horse. If a visitor didn't know better, they might think they were gazing at a common saddle horse, albeit one with a condescending demeanor. John Henry was not a horse that the public was allowed to pet. But when I chatted up the gal who led him out for his regularly scheduled walk of fame, she did permit me to ever-so-briefly pat his chocolate colored neck. I touched the leather halter and traced my finger along the brass nameplate that without a single flourish read, "JOHN HENRY."

Perhaps it was the fact that I was revisiting that momentous trip to Hollywood Park, or maybe it was because I'm a confirmed horse lover, but I got teary-eyed. I was standing next to one of the greatest horses of my lifetime.

When I read that John Henry had been euthanized on the evening of October 8th, I cried again. It was time, no doubt, for the old horse (he was 32) to leave this earth. He'd been in failing health due to his advanced age and his veterinary attendant felt that the horse could no longer be kept comfortable. He died surrounded by his caretakers, including the woman who'd handled him for 16 years. We should all be so lucky to pass away in the company of those who loved us.

And so, farewell, dear John. And when we cross paths again, could you please prick your ears forward just once, for me?

I know a lot of you have memories of John Henry, too. HorseChannel has a John Henry Memorial page, where you can leave your condolences and memories, and read other peoples' comments.
Posted by Cindy Hale at 11:20 AM

I too cried when John left this world. I have only seen him twice in my lifetime (Breyerfest 2006 and 2007), but never saw him race in person. But I hear it was a true miracle watching him race.