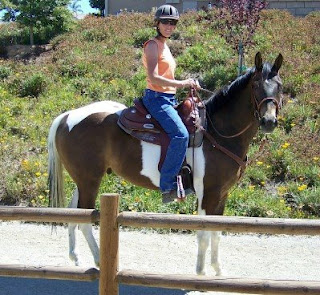 It was 96 degrees today so of course I had to stick with my plans to take Wyatt on his inaugural trip along the trails through my neighborhood. My day in the saddle had actually begun at 7:30 a.m. That's when my friend Natalie, on her grulla Dunzee, and I on Wally, rode for 2 hours from my house to the river park and back. Then I gave Wally a shower and brunch and tacked up Wyatt. Natalie returned aboard her other grulla, the very reliable JustDun, who would serve as Wyatt's escort and mentor. Of course, this came as a big surprise to Wyatt, who I think had come to believe that Wally was the only horse he'd ever rub shoulders with. Literally. As it turns out, Wyatt was a perfect gentleman! It didn't seem to matter whether he was following JustDun or in the lead. He just cruised along (although he was, admittedly, a bit of a tourist), absorbing everything that the trails in my neighborhood had to offer: barking dogs, kids in the front yards, lawnmowers, active sprinkler systems, leftover sandbags strewn across the trail and even a blowing piece of styrofoam. Natalie and I figured there was a 50/50 chance the aforementioned piece o' foam would fly up into the face of one of our horses as we rode past-- which might have resulted in a slightly different blog posting today-- but it did not. It just laid there like a good piece of styrofoam. We even trotted and cantered quite a bit. Wyatt was the personification of that old adage,"not able to walk and chew gum at the same time," although with him it was "not able to GAWK and CANTER at the same time." It went sort of like this: cantering, cantering, cantering, cantering, look at that kid on a bicycle, trotting, trotting, trotting, cantering, cantering, gosh those palm trees are huge, trotting, trotting, cantering... I'm sure you get the idea. But there was no shying, bolting, playful crowhopping or anything that made me feel like Wyatt would not eventually make a solid trail horse. So... Mission Accomplished! We've done our first ride around the neighborhood! Now it's back to arena work, where I can finesse all that bending and suppling and adjustability that helps make every horse a more pleasurable horse to ride. It'll be a long time before Wyatt rivals Wally as my all-time favorite trail horse, but at least we're on our way!
~~~~~~~~~~~~~~~~~~~~~~~~~~~~~
I always enjoy reading your comments. To leave your thoughts and to correspond "behind the blog" just click on "comments" below.
Posted by Cindy Hale at 6:43 PM

Yahoo! The inaugural trail ride - bring out the champagne!!! You both look so happy! I swear he's smiling in the photo!

Here's the $3000 question (or whatever you paid for Wyatt, Cindy) is he worth the money you paid for him based on your experiences with him since you bought him? Find out next week on, Life With Horses, Starring Cindy Hale and her horses, Wally and Wyatt.

woohoo! How exciting! I'm envious! What a sweet boy you have there! And cute too!

I guess we both look like we're smiling. I swear, my first thought when I saw that photo was, "Wow! I have really big white teeth!"

Hmmm... Is Wyatt worth what I paid for him, based on my experience thus far? I think that's a fair question and one I'll have to answer in an upcoming blog. Thanks for the idea. (And by the way, he cost FAR LESS than $3,000).