Trust Me, You Don't Ever Want Me to be Your Trail Guide 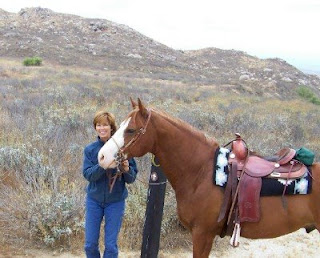 Here I am, smiling bravely so that Wally won't sense that I have gotten us lost. I'd hate for him to think that sage brush and wild mustard plants were on his dinner menu.

My sister Jill and I spent Memorial Day riding at Lake Perris. I know, it doesn't look much like an area that would be home to a huge lake and a boating marina, but trust me, it's there. Far, far in the distance. Otherwise the scenery is rather wide open and remote, as you can see by these photos. By the way, you'll have to forgive the lop-sided/off-kilter appearance of the pictures. It's not easy to snap a photo from the back of a moving horse... or so I've learned.My sister took this photo of Wally and me when I hopped off to examine the trail marker. More about that later.

Like all of our previous trail rides, this one contained several elements of calamity. To begin, my sense of direction-- or lack thereof-- had us headed up the wrong freeway, which is not a good thing in Southern California traffic. Adding to the silliness? I had just driven the exact same route to the exact same location-- Lake Perris-- with my trail riding buddy, Natalie, on Saturday. You'd think I'd remember how to get there 48 hours later, wouldn't you? My waywardness prevailed throughout our excursion when I blithely pointed at a trail marker and said to Jill, "Oh, let's head off that way." And then, 2 hours later, we had lost sight of our truck and trailer and every other sign of civilization. When we came upon a fresh carcass of a large snake (minus its gnawed-off head) we interpreted that as an omen. Perhaps it was time to start figuring out which trail to take to get back to our starting point. I mean, you know, the serenity and all that was nifty, but after a while we began to wonder if we were headed out of California. Fortunately, we found a trail marker that pointed west-- the direction back to the trailer-- and we gleefully took that path. Hence the smile upon my face!

Oh. And just so you know, even though Jill and I were quite ready to plop into the cab of the truck and head home, neither of our horses seemed particularly winded or tired. My sister's horse, Topper, is an off-the-track Thoroughbred who spends the first 15 minutes of every trail ride thinking that he's headed to the post at Santa Anita. Once he settles down he still out paces Wally at every gait. Wally has to do his western jog to keep up with Topper's long-strided walk. And he has to lope to stay alongside Topper when the big Thoroughbred is trotting. Yet after nearly 3 hours of riding, they both seemed quite willing to explore more territory. But that would have to wait for another day. Hopefully it'll be a day when I have a map of the trail system. 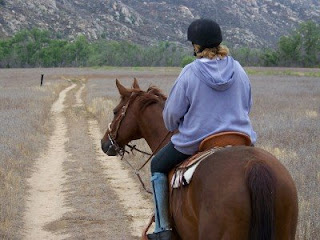 This is Jill and Topper, trying to decide if they're headed in the correct direction or if the Mexican border is just over the next hill.

Oh trust me - my sense of direction is nonexistent. I got lost driving home from the barn, the very same barn that I've been riding at for the last four years. Quite embarrassing. And it was the day I got my license as well, so my parents wouldn't let me drive on my own for a couple weeks.

I was very pleased to see three blog updates. :D I was so excited to come home from Lake Anna in Virginia and read and laugh. Especially laugh - I need that considering I just kayaked across one of the largest man-made lakes in Virginia. Ouch.

It sounds like you and your sister have so much fun together. My sister thinks my riding and my horses are a waste of time.

Well if it makes you feel anybetter,
i have no sense of direction. My friend and i did a science fair project ( on horses of course) and we went to the state science fair.so i was the co-pilot, we made it there perfectly fine. BUT then we got lost so many times trying to find various places. At one point we were trying to find the banquet hall at u of I and i ended up at a dead end with really good ice cream i might add. THen my mom fired me as co- pilo(sigh of releif) THEn we were leaving and guess where we ended up. THe Dead End! we had to of got lost at least 30 time in about 1 day!

Ha haha. Now I don't feel so bad!!! Once I went out riding solo on my good horse Shadow, and we traveled through fields, and down country roads till I was quite lost. I gave him his head, and said a prayer. He firmly pointed his nose towards home, and started walking like he meant business. After all, feed time was an hour past due!! We came upon the creek that ran behind our pasture. It was flooded with rain water. He would NOT take the long way around! He didn't get nasty, but he did absolutely let me know we were going HOME, and that he was HUNGRY!! So after I argued with him, debated walking and leading him, and finally realized that he didn't live to be old by being stupid, I gave in. I said a good prayer, took my feet out of the stirrups, buried one hand into his long mane, aimed him towards the creek, and smooched to him. He carefully but firmly walked down the bank, plunged into the creek (He was 14.2, and the water was deeper than he was tall.. though I didn't realize it till it was too late!) and swam across. My brave boy carried us safely home, and when I got him unsaddled, and got him rubbed down and fed him, he rubbed his head up and down on me like "it's okay, I still love you!"
He's gone now, and I miss him terribly. But he never ever let me down. He kept me safe, even when he knew that he was smarter than I was!! I was lucky to have had such a good horse. He was truly my soul mate. :0)
Jamie

I've gotten lost as well. I was riding my old horse, Red (now gone), out on the massively huge unfenced area known as the Navajo Reservation. I got separated from everyone - I was supposed to meet up with them "up on the hill." They didn't tell me the "hill" was the giant mesa some 10+ miles away! So I waited and waited on the nearest hill, then decided to go home once it started getting dark. I was well and thoroughly lost, but my old boy knew where to go, and got my silly butt back home in no time. I was probably only 10 or so at that time...

I feel like the lucky one here. I am a trail guide at my barn, taking customers out on hour-long trail rides on about 100 acres of trails. A couple times, with the other workers or with the Advanced Campers I was teaching, we've decided to go "trail blazing", aka off the marked trail, either trying to find long-lost overgrown trails or simply wandering around, or, sometimes, making our own trail. Hard as I've tried, I can't seem to stay truely lost for more than a couple minutes.

Honestly, your comments make ME laugh! I'm so glad I'm not the only one who's "directionally challenged." I especially got a chuckle out of Christina's comment about meeting her friends "up on the hill." I'd still be up on the nearest hilltop, waiting for everyone... although Wally would have long left me in order to hang out at the nearest diner.

Wally is cute Do you wear an ridding helemt?