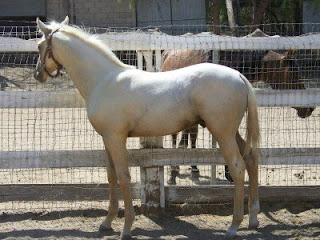 For those of you who've never raised a foal before, I'll let you in on a little secret: The most stressful, nerve-wracking part-- after the actual foaling process-- is the act of weaning Baby away from Mommy. On large farms it's not that big of a deal. The colts are all sent packing into one pasture, the fillies are herded off to another pasture, and all of the erstwhile Mommies are left to sip tea and chat about their former children amongst each other beneath the trees in yet another pasture. But those of us who raise one or two foals at a time on small acreage don't get such luxuries. Instead it's more like, "Let's put Junior in this big paddock, which is three doors down from Mom."

Fortunately, that tactic if handled properly, actually works just fine. What helped with Cowboy is that his mother, April, thought that unloading her 4 1/2-month-old colt was just hunky dory. She was perfectly happy to help him pack his things and head out the door. Whether that's because she gets to be temporarily housed in a spacious, fully covered paddock or because she was an orphan foal that never realized she was an equine, I'm not sure. But any wailing and crying that ensued came from Cowboy, not from April. From the get-go April's impression of weaning was, "Peace at last!"

Although Cowboy spent the first couple of days wandering the fenceline, hoping that a New Best Friend Forever would materialize, he eventually decided that he could survive on his own. He's settled down and is living independently, although he does appear to idolize Topper, my sister's ex-racehorse that has found a second career as a show hunter. I'm not sure if Topper is entertaining Cowboy with tales from the track or the show ring, but the two of them spend hours together. Sometimes their noses touch. Other times they yank fly masks from each other's face. Or they simply stand alongside each other, dozing in the sun, the fence being the only thing separating them.

When Cowboy is taken out of his pen to be groomed and turned out, he's the perfect Good Little Boy. He even stands to get a shower. Ah kids, they grow up so soon! However, next weekend he gets his feet trimmed for the first time. I'll keep you posted on how that goes.

Click on "comments" below to contribute your thoughts. I love to read them!

How beautiful is he??!! Absolutely gorgeous. I'm glad that they are doing well. I only wish my yearling colt could've been weaned that gently. He was raised in a barn aisle before I got him because the mare was so crippled. she had navicular, and she foundered in all 4 feet the night he was born, and to top that off she almost bled to death. So she was in awful shape. They shouldn't have bred her again, but they just had to get ONE MORE from her. As her last 2 were fillies, one a palomino, and the other a gorgeous dun. This one was born pally, but turned gray, and he was a boy to boot. They were so dissappointed. But I got the best part of that deal.
Anyhow, when he was 8 months old, we showed up with the trailer, dragged, shoved, and pulled him into it. The poor mare was nickering, and she hurt so bad when she tried to follow us, she crossed her front legs and almost went down. After he was loaded, I went back to Sunny, and hugged her neck and promised her that I would always take good care of her baby. I braided her forelock, and kissed her nose goodbye when I left because I knew she was going to be put down, and I'd never see her again.
Chance kicked and screamed all the way home in the trailer, and when we got there he was drenched in sweat, wide eyed and terrified, with a couple of good scrapes. I wish that it could've been different for his sake. But he is now very happy and healthy. In the beginning, he was terrified of everything, as he had never seen anything.
Cowboy is so very gorgeous!! I'm glad he's a good boy. Some of them are naughty when they don't have other babies to play with. They try to play with their humans!

YAY! cowboy news! hes turned into quite the pretty boy! Glad he has topper as a new friend. Also Very glad that your sugery went well!!! i'm happy to finally catch up on your blog! it definatley cheers me up! i was sad because i have to m iss the show i've been looking forward to going to! but i'll survive! lol And Jamie very glad that chance is alright, and i feel sory for his poor mommy but i'm very happy you braided the sweet momas hair and gave her a good memory, before she had to be put down

~*~Cowboy is gorgeous! He looks exactly like my dream horse I've imagined having since I was little. I adore Palomino horses, and Warmbloods are my all time favorite breed. You guys are so lucky to have such a beautiful healthy baby boy! Good luck with him :). I also have an ex-racehorse like Tooper that I rescued. He has really transformed in the past few months and I'm taking him to his first show in October. Keep us posted on Cowboy, and take as many pics as possible!~*~

Aww what a cutie he is!
At the stable where i know board my first horse, they just wenaed all their little Paint babies.
They seem to be fairing well. Good luck with Cowboy! <3

Cowboy would be so proud to know that he has fans. Topper and Wally would be jealous. I'll take more photos soon. I promise!