Ron and I celebrated our 26th wedding anniversary this past weekend. Our relationship has withstood the challenges of a non-horsey man being married to a horse crazed woman. Naturally, this can cause some stress at times, although fortunately most of it Ron takes with a good sense of humor. Most recently was the Pookie Incident.

I have a habit of calling people and animals by nicknames and I am apt to change these nicknames at a moment's notice. My dog Betsy has been christened with both Winkie and Scooter. Intermittently I call my sister, Jill, Sundance (as in Butch Cassidy and the Sundance Kid). Over the past few months I've been trying out the nickname "Pookie" on Ron. I have no idea where that name came from, but I like the sound of it, perhaps becuase it sounds like Cookie but even sillier. Or sweeter. Take your pick.

I'm sure many of you are gagging at this revelation, that I call my very manly man husband Pookie. But I thought it was cute in a wifey sort of way.

Ron, on the other hand, is not at all clever about nicknames. He persists in calling me Honey, which I find old fashioned but I cannot break him of this habit and it's been 26 years now, so what's the point? Honestly, when we were first married, I thought he was calling me Honey all the time because he'd forgotten my real first name.

I guess Ron was accepting being labeled as Pookie because he was actually responding to it, although I was smart enough to refrain from calling out, "Hey, Pookie!" when we were in mixed company-- like around other manly men-- in places like Home Depot or the local truck wash. Maybe (who knows) he thought it was a special term of endearment I'd saved just for him.

And then he overheard me the other morning when I walked out to see Wally. "Hey Pookie," I called, "do you want to go for a ride?"

At about the same time Wally trotted up to the gate, nickering, Ron stepped out the back door and said, "I thought I was Pookie!"

I was faced with the two men in my life, Wally and Ron, and both were owning the title of Pookie. "Well," I said quickly, "you're both Pookie. You're Pookie 1 and Wally's Pookie 2."

Ron looked at me for a moment. "Uh-huh. How about I'm not Pookie. At all."

Hmmmm... Maybe he never liked being Pookie in the first place. Wally, however, thinks the name is quite cute and is perfectly happy being the one and only Pookster. 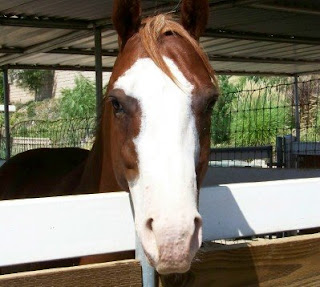 oh my god, i've got tears in my eyes from laughing. My husband, the very un horsey computer geek, is named Frank, and his nickname is Pookie - he came with the nickname - from his niece when she was young.

This is hilarious! I was cracking up and I just had to show Mom. Of course, she goes, "Do you want me to call your Daddy 'Pookie'?" Silly mother.

Now only if I had a guy here to call Pookie....

Too funny!!
I'm getting ready to marry my very non-horsey guy at the end of the month. I'll have to try out some nicknames for him, including pookie!
I got in trouble last week when I
(involuntarily) clucked at him to get him to move while I was sweeping.

How funny! I love it. I call my paint mare baby-doll. Chris thinks I'm nuts. Skipper is kip-a-poo, Blue is turd-nugget (he's always doing something naughty!) Mom's mini, Ladd's Silver Lady is.. well.. Mini! Chance gets called everything. Houdini, brat, trouble...
I forget sometimes when I have company over to see the horses that my pet names for them are strange, until someone gets a funny look on their face.. Turd nugget gets the most strange looks. I always have to explain that one... ;)
We were at work last week and Chris did something and I called him turd-nugget... OOPS! I got it for that one!! LOL!
Wally is one handsome boy!

That is so funny! I call my mare Emma Princess or Snookums About 6 months ago I got my friend Mandy to call her stallion Smokin' Joe sometimes Princess or Josephine but she has made the mistake of calling her husband Ray Princess a few times after being out in the barn for a bit. Both her stallion and husband are getting a bit of a complex from the feminine names.

I love Wally's picture! He definately has a Pookie face! Would love to kiss that cute nose!

The nicknames we come up with for our horses are really creative... and humorous! Hmmmm.... I think I'll have to write a little bit more about the names we think of and that special little voice we use when we're talking "horse language."