Have Lead Pony, Will Travel

As I've mentioned before, I give riding lessons at the facility owned by my former show coach, Sue Smith. Sue's husband, Bruce, is an officer with the Arcadia Police Department, and part of his job is to patrol Santa Anita racetrack. Bruce began a mounted patrol unit for the Arcadia PD, and his first police horse was his own AQHA gelding, Ringo. The two of them-- Ringo even had his own badge-- monitored huge race track crowds during big events like the Breeders Cup. They've also searched for 'perps' while cruising through the parking lots of Arcadia's shopping malls during the Christmas season. Though Ringo retired honorably from the mounted patrol unit, he seemed bored just being an occasional lesson horse for novice adults. He's 22-years-old, but he's one of those awesome old fashioned American Quarter horses blessed with incredible soundness and a solid work ethic. So when Sue and Bruce heard I was looking for a lead pony to escort Cowboy, my mom's colt, around town, they offered up Ringo. How could I go wrong? 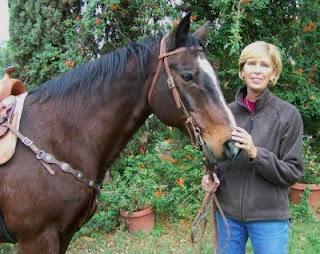 This photo was taken the first day that Ringo arrived at my parents' small ranch, which is actually just across town from Sue's. Ringo and I have known each other for years, so he's quite trusting of me. But as you can tell by the look in his well-seasoned eyes, he's not quite sure what he's gotten himself into. 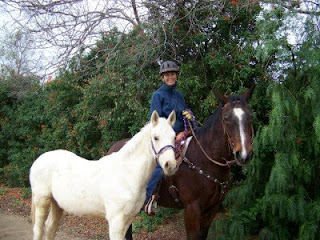 The very next day Ringo discovered his new job: Lead pony and mentor to young Cowboy. "Hmmm..." Ringo says, "I thought my pension from the police department precluded me from any more active duty assignments."
~~~~~~~~~~~~~~~~~~~~~~~~~
The first couple of episodes in the Ponying Department went fairly well. Ringo is very forgiving, but he's not a fool. If Cowboy got too rambunctious, Ringo would do the "Aged Quarter Horse Gelding Stare" and snarl at Cowboy until the yellow colt regained his composure. Ringo also exudes confidence, and Cowboy picks up on that. An added bonus? Ringo had a stint as a roping horse, so if Cowboy ever hinted that he might not want to continue down the trail, I didn't hesitate to dally the lead rope around the saddle horn and allow Ringo to convince Cowboy that it would be much easier for everyone if he just obligingly came along.

After only a few sessions, Cowboy was following Ringo everywhere as we coursed through town along the bridle paths. We encountered barking dogs, water puddles, construction workers, flocks of poultry, other horses, trash bins and lots of traffic. Since Ringo pays little or no attention to any of it-- other than making sure we're all safe and accounted for-- Cowboy doesn't react, either. However, I'm sure some adventures await us. That's how my life with horses always seems to go.

Those pictures are adorable. Cowboy and Ringo look so cute together. I'm sure Cowboy's having lots of fun exploring the world, still safely attatched to a calm, wise-in-the-ways-of-the-world kind of horse. And he's looking oh-so grown and handsome now! Pretty soon he'll be almost as unflappable as Ringo! Thanks for sharing!! :-)

Soon Cowboy will be taller than Ringo, so I have to get all of my ponying in quickly!

Cowboy and Ringo are gorgeous horses : )