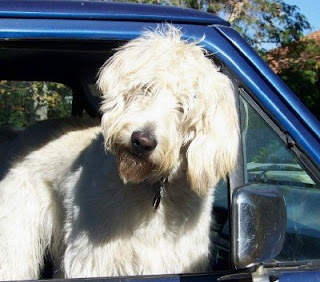 This is my father's dog, Skippy. Though the animal belongs to both my parents I doubt my mother would ever lay claim to the pooch because he's perhaps the most petulant, rambunctious, mischievous canine our family has ever owned. And that's saying a lot. Skippy has eaten or crunched at least $1,000 worth of eye glasses, television remote controls, slippers, shoes and pillows. (Yes, my mother for some perverse reason has kept a running total on the mayhem). Then there's the grocery list of foodstuffs that Skippy has swept from the countertop, ranging from entire sticks of butter to batches of cookie dough and loaves of bread. Last Christmas he undecorated the tree until my parents finally got wise and installed a section of white fencing across the living room doorway. For its own safety, the poor Christmas tree had to be corraled away from the dog.

And yet my father loves that dog. Whenever my dad takes the old blue pickup truck out for a drive-- usually to get a load of hay-- Skippy goes along in the front seat. It's quite the sight to see my dad behind the wheel of the aging Ford truck with the big blond dog sitting alongside him. While you're smiling at that warm image, let me interject that Skippy has entertained himself numerous times on these drives by nibbling through the seat belt, chewing off the cruise control knob and slobbering nose prints on the inside of the windshield. But my father doesn't seem to mind. Nor does it matter to him that Skippy is famously missing the mark when it comes to being a barn dog. He's run off with and buried countless sweat scrapers and riding crops, and nearly every horse brush is peppered with canine teeth marks.

If you're wondering what kind of dog Skippy is-- other than a destructive one-- he's a Labradoodle. My parents have had many, many wonderful Labrador Retrievers, but for some reason they decided to venture into more exotic waters when it came time for a new pup and got Skippy, who's half Lab and half Standard Poodle.

The moptop hair coat is occasionally clipped into a semi-Schnauzer/kinda Cocker Spaniel coiffure. But that requires the services of Sarah, our local traveling dog groomer. She arrives in her state-of-the-art grooming salon on wheels and then proceeds to convince Skippy that he does indeed want to have a bath and a shave. As you can probably envision, that's quite an undertaking, with Sarah at one end of my parents' small ranch, my parents at the other, and Skippy somewhere in between, darting around wheelbarrows, hopping over hay bales and scurrying past the corrals to avoid his hair appointment.

This Christmas, when my sister, my brother and I purchased a gift certificate from Sarah so that Skippy could have a grooming session on us, I asked Sarah, "So this amount will cover everything?"

She sighed and replied, "Yes, it even includes the rodeo beforehand."

I followed up that comment with, "Hey, he really is a good dog... in an amusing sort of way."

Sarah, who has both horses and dogs, then said, "Ya' know, I've 'done dogs' for a long, long time. And over the years I've come to the conclusion that anything with 'oodle' in its name-- Labradoodle, Goldendoodle, Lhasadoodle, Jackadoodle,whatever-- if it has 'oodle' in it, antics will ensue. That's all I'm sayin'."

It's the antics of barn dogs like Skippy that make me appreciate barn cats. Though I'm not really a cat person I do like having a kitty or two around the stable. Here at my house, I'm slowly trying to convince a big spotted feral kitty that I'm not a scary monster. I know it lives underneath the cypress trees I planted on my hill, across from my feedroom, because sometimes when I go out late to conduct a bed check on Wally I see it dash into the undergrowth. Eventually I plan to trap it, get it spayed (or neutered) and tame it enough to get it to hang around consistently. I'll be following the advice found in the article I wrote for Horse Channel: Here Kitty, Kitty... Come Live at My Barn! And by the way, the photo at the top of the article is a picture I took of my parents' formerly feral barn cat. She, unlike Skippy, is quite well behaved and has never once chewed up a set of seatbelts.

This is hysterical. Have you, perhaps, seen the movie Marly and Me. I think you might have a Marly on your hands there.

Oh Cindy, I have the same problems with my Aussie, well sort of. He likes to eat anything and everything. Although he is an Aussie, he is such a clown. Oh did I mention that he likes to roll in the most disgusting and smell things he can find. But for some reason, horse apples are not on the list. I guess they just don't stick a sell to his fur like raccoon poo. Plus hes a house dog, so we make plenty of trips to the tub. I have another aussie who is just an angel. How different they can be.

That is so funny! I have a little puppy, half Poodle half Cocker Spaniel, who is definitely prone to mischief. She chews up anything and everything, from lamp cords to headphones to furniture. But she's so cute we can never stay mad at her for long. It sounds like she would have fun with Skippy. (Although it might be best to place them both in a dog-proofed room first.) :D

Cindy you have inspired me to start my own blog about riding. I took my very first lesson on Fri. and I'm 40! I read all your post this week from beginning to end. They are great and you are inspiring. Keep on doing what makes your heart full!

haha! I can imagine skippy now.... then start laughinh.. and think our sheltie, ironically named skippy acts very similar minus the continuous chewing, and running alot (he has hip displasa) buthe'll be michevious alot too! sometimes more than our mini Sznauzers! Good luck with your kitty :)

Ha! My dad used to take our dog everywhere, too, but stopped after he cost him a small fortune in car repairs- he's a seatbelt-chewer, too! The barn dog where I work, though, Jackson, is awesome. He'll herd horses for us and stop the moment we call him off. He's the most athletic dog I've ever known- as fast if not faster than the fastest horses on the place, which are barrel horses and barrel potential horses, and he can jump probably around three feet high. The highest he'll go when we set the bar is about 2 and a half feet, because he ducks under higher obstacles. He likes to go on trail rides with us, and always either stays with us or comes back with us. He'll also often run through gates and electric fences with no hesitation, just slipping right through. Good dog. He's amazing.

It seems my language skills need to be strengthened, because I totally can not read your information, but I think this is a good BLOG

Skippy is such a cutie! we used to have some Lab/Border Collie pups (7 of them!) and you could never sweep the porch off or sweep out the garage because they would all gang up and attack the broom. So cute and funny though.

Thanks for the responses! My dad just informed me this evening that Skippy had chewed a hole in the arm of their good chair. "He really seems to like that chair," my dad said. Huh. What would Skippy do if he hated the chair? *sigh*

Wow. I have a girl pug who frequently races around the house at breakneck speed, leaving a path of destruction and two very disturbed cats in her wake. :-) Love your blog!

Thanks! Glad you enjoy the blog. Recently, Skippy has been "allowed" into my parents' living room. The fence has been lowered. Immediately he began chewing on the armrest of the nicest upholstered chair in the room, the one covered in an English hunt scene print. "He really seems to like that chair," my dad said. *sigh*

It's a very Good website.Are you want to buy cheap led lights,lv shoes and live to cheap beijing hotels.

Many popular style of dunk sb shoes and
nike dunk shoes and so on are on sale in
http://www.ok-nike.com now , you can find a suitable nike dunks Anyway .welcome !

I found your this post while searching for some related information on blog search...Its a good post..keep posting and update the information http://regionalbar.com/dog-electric-fence/

Thank you very much for keep this information. go now

Want To Boost Your ClickBank Banner Traffic And Commissions?