The Education of Cowboy 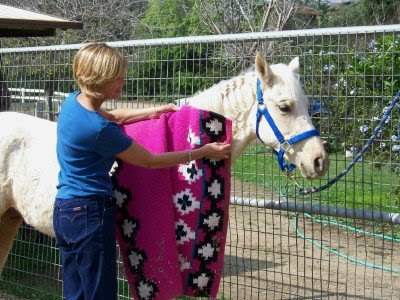 One of the less glamorous tasks of bringing up a baby is introducing all kinds of tack at an early age, so that nothing is a surprise later on.
~~~~~~~~~~~~~~~~~~~~~~~~~~~~~~~
Let me make this clear from the outset, just in case anyone thinks I'm endorsing the hair-brained concept of owning a baby horse: Raising and training a foal is not fun. It's a lot of hard work and it's full of boring repetition. I've had many years of experience so I feel qualified to make that statement. I hesitate to reveal how many years ago I raised my first foal (I'm trying to ignore birthdays at this point in my life), so let's just say the years could be measured in decades. I have a photo of me with my very first foal, a bay Thoroughbred colt. My hair is cut and permed in a fluffy disco bob. Does that give you a clue as to the era? If I were to summarize my personal philosophy of bringing up a baby, I guess it'd be this: First teach the foal not to fear you. Then teach the foal to respect you. Then all will be right with the world.
~~~~~~~~~~~~~~~~~~~~~~~~~~~
Of course, unexpected things still happen once in a while when you're raising and training a young horse. For example, I've been rather smitten with Cowboy because, with the help of my sister, he's learned to behave like a young gentleman. Cowboy stands tied to be groomed and have his feet cleaned. He loads and trailers quietly. He clips. He bathes. He even has the basics of longeing at the walk and jog and understands what "whoa" means. (I teach rudimentary longeing early on, only at the walk and slow trot, just as an exercise in control and discipline). Yet today when I ponied Cowboy off of Ringo, the palomino colt revealed what an immature, dinky-brained "kid" he really is. All was going well. We'd trotted and cantered side-by-side through the neighborhood, past barking dogs, trash cans, traffic and assorted farm animals. We even tramped through puddles of water. As we turned toward home, I pulled Ringo to a walk and the two horses were just lazily cruising along. But when we reached a particularly sandy patch on the bridle path, Cowboy just plopped down and began to roll! Right there, in the middle of the trail! I yanked on the end of the lead rope and called to him to get up. Cowboy complied, but he had the most quizzical look on his face, as if he couldn't understand why it wasn't perfectly reasonable for a horse to roll in such a lovely spot of clean, soft sand. Do you see how raising a baby horse can have its challenging moments? Just when I'm gloating over the progress of Cowboy's education, something like that happens!
~~~~~~~~~~~~~~~~~~~~~~~~~~~~
I always read my emails. You can send them to: hc-editor@bowtieinc.com or you can click on "comments" below and leave any thoughts or personal tales there.
Posted by Cindy Hale at 4:19 PM

Cowboy is looking very grown-up and handsome now, although still cute like a little kid. I'm sure he'll grow up to be a wonderful horse. I love his coloring!! I'm sure all your hard work will be worth it later on. Thanks for sharing your story! I have yet to raise a foal of my own but dream of doing it someday.

Ah! Those are my favorite moments! - The "baby" moments. :) Mine did that to me too, although I'd JUST given the brat a BATH! Cute though - and you have to laugh!

Mine now tries to send guilt trips by looking rather longingly at the fresh, white sand with sad puppy dog eyes as I very purposefully walk on by... ;)

At least you can brag about the fact that even though he did have his "baby moment," he got up for you when you told him to.

Ha! Nice! At least he listens when you tell him to get up, though. Gotta love 'em.

Ah yes... I once had a Paint colt nicknamed Dusty. That was a prophetic name. One day my sister and I gave him this very sudsy bath to prepare him for a halter class the next day. We were so proud of our washing job! He looked gorgeous! But of course, as soon as we put him back in his paddock-- I mean the very moment we unsnapped his lead rope-- he rolled! So we had to do it all over again! Hopefully Cowboy's coat color will darken up a little as he matures so any dirt and grime won't be as noticeable as it was on "Dusty."