Have Parka, Will Judge 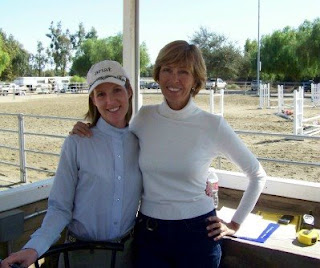 Here I am, in non-parka mode, posing with Kristin. She served as my announcer once she finished showing in the other arena.
~~~~~~~~~~~~~~~
Just when I thought I was finished judging horse shows for the year, I got a call to fill in for another judge who had to bow out of her assignment. I had nothing on my social calendar (ha!) for Sunday, so I accepted. And why not? First, it was at a showground not all that far from my home. Second, I know the management crew and they're a very competent, fun bunch. And third, Wally's orchard grass/alfalfa hay mix is about $22.00 a bale. As I've mentioned before, I equate every little job with how many bales of hay I can buy with the paycheck. I wasn't about to turn down the gig! The only drawback to this particular judging duty was that a brisk, cold wind started blowing the night before. By early morning it was howling! All I could think of was, "Well, I wouldn't be sending any of my little lesson kids to a horse show in this kind of weather." I truly thought the show would be cancelled. But since I hadn't received a phone call by 7:00 a.m., I snuggled into my down parka (for the first time since last February) and headed to the show. Guess what? The wind there was reduced to nothing more than a breeze. The temperature was a bit nippy until the afternoon--- well, nippy by Southern California standards-- but overall it was very pleasant weather.
~~~~~~~~~~~~~~~

For most of the day I was teamed up with Kristin, a congenial young woman who served as my announcer. I'd worked with her before. Kristin is a kindergarten teacher, and I used to teach school, so during any lulls in the action (like while the arena was being watered) we'd share anecdotes about the classroom. I always find it interesting that schoolteachers, in general, are very verbally expressive. We like to chat! Plus we're very positive by nature, forever acting as cheerleaders for our students. I think that's how I approach judging: I truly want the riders to put in a good performance. I'd like everyone to get an "A".

Kristin had competed earlier in the day in the other arena, under the other judge, who happened to be Meg Schulman. She is a USEF "R" (large R) judge, which is a testament to her skill, training and experience. In the past I've interviewed Meg for Horse Illustrated, so naturally I had to make use of this time together and get some interesting quotes and insights from her for future use in the magazine and on Horse Channel. Meg is a genuinely nice lady. She is also expressive and articulate. She probably would've made a wonderful schoolteacher!

Sounds like a great way to earn $ for the Wally fund!

At least you have some fun! and it goes toward the wonderful hay fund!

Ha! Absolutely: Any money earned goes to the Hay Fund for Wally. Although lately it's been the Re-Shoeing Fund for Wally. *sigh* During this last spate of wind I put him in his covered pen and he promptly got a HIND SHOE stuck in the wire and yanked it off! So guess what I'm doing today? Pulling out all the wire.

Hey, I simply hopped over in your web page by means of StumbleUpon. Not one thing I might in most cases learn, however I favored your feelings none the less. Thank you for making something price reading. 메이저토토사이트

This informative blog is really interesting. It is a good blog I read some posts I was looking article like these. Thanks for sharing such informative. 온라인바카라

I’m really glad I have found this information.
온라인카지노
카지노

Youre so right. Im there with you. Your weblog is definitely worth a read if anyone comes throughout it
토토
먹튀검증