Like many horse owners, my sister Jill and I are in the habit of assigning our last names to our horses. Hence, Wally becomes "Wally Hale." And my sister's horse becomes "Topper Jones."
*******
Today I hauled Topper Jones over to Sue's so that I could put him to use as a school horse for one of my lesson kids. Sue and I are still shopping for another school horse since saintly Cassie died, but we haven't found a suitable replacement yet. So when duty calls, Topper answers. Topper has the perfect personality to be a lesson horse understudy. He's extremely tolerant. Physically he's blessed with smooth gaits and a soft jumping style (the kids don't get tossed out of the tack). He doesn't intimidate the kids because he's not in any big hurry to go anywhere. And he's had nothing but good rides since he came off the racetrack, so he's dependable and safe.
*******
It would never occur to Topper to do anything bad or naughty. Mischievous? Yes. But never naughty. He'll flap his lips when he's bored. If you're not watching he'll grab his reins in his teeth. And once in a while he'll simply walk right up to whichever human is standing in the center of the arena and make a pest of himself, but he's never truly naughty.
******* 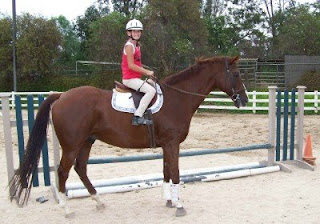 Topper pauses between jumps to have his photo taken. His rider, Cameron, is about the size of a twig. That doesn't matter to Topper. He explains it this way: "As a former racehorse, I am quite used to being piloted by short, wispy riders." 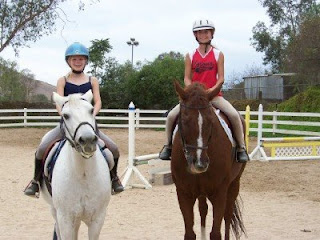 Here Topper and Cameron stand alongside one of my other students, Siegen, and her pony Amanda. As you can tell, there's a contentious relationship between Amanda Pony and Topper. Amanda doesn't seem to appreciate Topper's flirtatious behavior. "How many times do I have to tell you," Amanda says, "I'm not interested in having a carrot juice cocktail with you!"

Topper Jones is a gorgeous fella : )

How cute! I took my sorrel overo mare to a show yesterday, and there was a little girl there on a matching pony! They were so cute together! I wish my husband had been there with my camera. My mare and the pony kept touching noses, and nuzzling each other, even though they had never met before. It was adorable! They really matched! Koda is 14.2, and the pony was a large shetland sized pony. That little girl and her pony were so precious together! I loved it. She rode well, and did great. You could just tell that that pony really enjoyed being with her. They did barrels and poles and halter, and a lot of other things, and just had a blast! Too cute.
Jamie

Topper Jones is a beauty! Poor Topper though, being rejected by the lovely Amanda to meet later for a carrot juice cocktail. :( Now that my mare Emma is in her second trimester of her pregnancy, she is back to her ol' self, digging at the mats in her stall like she is starving for food and snapping at Joe, the father of her foal and a TN Walker, when he is close by, i.e. the crossties in front of her stall. Last night she stood(without being tied up) outside of her stall and watched me clean it, then when I pushed the wheelbarrow out of her stall, she waltzed right in. They are pips!
Gwen

Topper says, "Thanks for confirming what I already knew: that I am one heck of a good looking horse. Sometimes, when I catch a reflection of myself in a pond of water, or a window pane, I think, 'Eh, Secretariat had nothin' on me'."

Haha - but do you give your horses MIDDLE names? My friend gave her horse Willie a middle name - "Rainbow Bright." Every time she calls him Willie Rainbow Bright, he runs away. It cracks me up. She also gave Bucky a middle name - Fabio Sexybeast. Naturally, I do NOT use that name.

Topper's Humom -- and Cindy's sister -- says thanks for the compliments on my boy. I have to laugh ... he's a grandson of Secretariat, not that that really means anything since there are so many of them, but he seems to think it gives him some kind of bragging rights, LOL.

Maybe Topper should join a bachlor's club. My gelding can't quite grasp why neither his flirting nor his acting like a stud don't work for getting the girls, specifically Foxey, who really is Foxy! Flash (aka Smart), on the other hand, not so smart! lol