During the winter of their first year, young horses are often referred to as "short yearlings." That's not because they're short in stature. Instead it's a reference to the fact that they're approaching being officially one year old on January 1st, even if their actual birth date is several months later. You hear the term "short yearling" used in the world of Thoroughbreds a lot, however, I think it's appropriate with all breeds of horses. After all, the term "weanling" doesn't quite fit something that's chowing down on hay and pellets and wearing a halter that would fit the average 15-hand horse. Unfortunately, short yearlings are also often ugly yearlings. They're undergoing a growth spurt and they're shagged out with their first crop of winter hair. As Exhibit A in My Study of The Short Yearling Uglies I present recent photos of Cowboy: 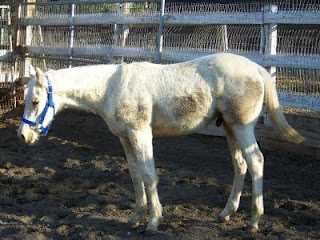 If you look closely enough, you can ascertain that Cowboy's hair coat resembles that of a Mongolian yak. And his color is now that of soured milk. Or room temperature mayonnaise. Thankfully, despite my less than complimentary descriptions of his cosmetic attributes, his overall conformation and movement remain pleasant. 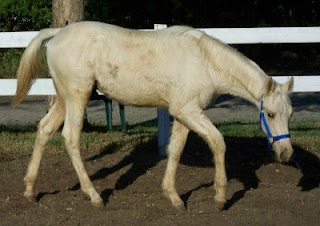 As Cowboy attempts to strike a dainty pose while he walks elegantly over the damp ground, he seems to be saying, "There really is a cute horse inside me. It'll be revealed come spring time. I promise!"
*****************
Other attributes of the typical short yearling uglies? How about a butt that's several inches higher than the withers, a stubby tail that's perpetually held out like a stiff broom, and a head that seems destined to be three times too large for the body. Wrap it all up in a fur coat more suited to a goat (is that a beard on that coat's chin?) and some winter time mud splotches, and you have a colt that hardly resembles the fancy, glossy-coated fairytale equine prince of just a few weeks ago. But I have faith. Fortunately, the Short Yearling Uglies is just a temporary affliction.
*****************
Click on "comments" below to share your thoughts!
Posted by Cindy Hale at 10:13 AM

Cowboy is so adorable! My two yearlings are in the Uglies right now. My warmblood foal looks like a pillow he's so fuzzy, and my draft horse cross is...i dont even want to start on his uglies!

Wow - you know, he looks just awful. I think you should just give him away. I'll be there in just two seconds to come pick him up. ;-D

He's certainly going to be a very handsome horse. What a cool baby! Thanks for keeping us updated on him!!

LOL!!!! Oh my god - and dont forget the huge ear phase. Leo (half percheron/half thoroughbred) went thru this mule stage - where his ears were GINORMOUS. And, then, the head grew into the ears - so now the head is also GINORMOUS - but at least they match!

You're all so funny! Hey, at least we can laugh at the "ugly" stages of a horse's growth. There's no denying that there's a definite yuckiness the first winter or two.

LOL. Now I don't feel so bad about my "ugly duckling". He's a wierd shade of gray, with dark legs. His butt is a full hand (or more) taller than his withers. He is definately not "cute". He looks like he's made with spare parts! A guy came by and looked at him... well, let's just say he wasn't impressed, and I still have the colt. I told the guy to come back next summer and take a look!

I just got caught up reading the past few posts, and I have to say that I am definately overprotective of my "horse kids". I feel for the lady who's mare got injured. It just makes me sick to think that stuff like that really does happen. We have had people shoot fireworks at my horses. They got more than an earful. I also found 2 arrows in my back pasture, within FEET of my round hay bale. My horses spent the next few weeks beside my home in the small paddock. I just don't understand how people can do these things.

My colt has the short yearling ugly right about now... only he'll be a REAL yearling in a month. lol!